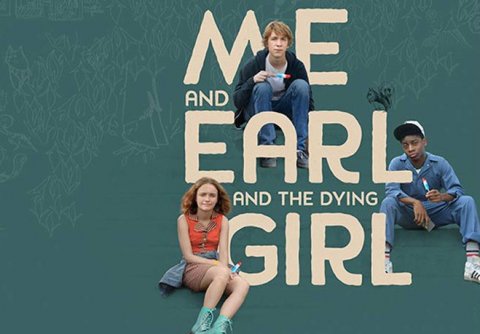 Recently, we received an official censorship request, asking us to remove an item from the library. The book is "Me and Earl and the Dying Girl"  by Jesse Andrews published in 2012, added to the library collection in April of 2013. The book is shelved in the Teen fiction section. Copies are owned by Princeton, Oshkosh, Montello, Neenah, North Fond du Lac, Ripon, Wautoma, and Oakfield libraries. "Me and Earl and the Dying Girl" has been checked out 19 times here. It was listed by the American Library Association as #7 in the list of most challenged books in 2021. The book was made into a movie, released 2015. We also have the movie on DVD.

As per our official collection and censorship policies, the request for censorship went before the Library Board.
The Library Board voted not to censor the book, and also voted to endorse an open letter written by Library Director Laura Skalitzky:

In regards to the request to censor the teen fiction book “Me and Earl and the Dying Girl” and have it removed from the Princeton Public Library:

Having personally reviewed the book, I can say that I certainly find some of the content distasteful. The author uses a lot of swearwords, the main character makes fun of everyone including himself in hurtful ways, the book mentions gross bodily functions including diarrhea and nose-picking, dialog includes insulting banter, characters discuss crass and sexist “pickup lines,” etc etc. It is clearly a book that relies on crude humor. However, I do not find that it crosses the line of material that is appropriate for older teens in general.

Furthermore, I believe that the overall theme of the book is a good one. The book attempts to show the harsh reality of a teenage girl dying from an incurable disease, and the various reactions of her friends, relatives, and classmates. In dealing with such heavy subject matter, authors often choose to use very realistic language in order to reinforce the fact that such situations do happen to people in everyday life, and we must navigate them somehow. In addition, as in the real world, the people in the book (especially the teens) are not all morally or emotionally mature. By the end of the novel, the main character has learned something about his immaturity and faces his shortcomings.

I am cautious about purchasing books for young people. However, my position on this book and others is that ultimately, parents must be the judges of appropriateness for their own children. I have known a mother who did not allow her 10 and 11 year old kids to watch the “scary” scenes in Disney movies as harmless as “Snow White.” I have also known some parents to allow their very young children to play extremely violent and graphic videogames. I know some parents don’t allow their children to read classics like “Little House on the Prairie” and “Huck Finn” because they consider those books “racist.” Although you and I might make different choices for these children if they were ours, they are not our children.  I admire Ms. Barzyk's intent to preserve the safety of the teens of Princeton. However, I believe we must allow their parents the freedom to make these kinds of decisions.

Parents are welcome, indeed encouraged, to question their teens and children about the books they are reading. They are free to set rules for their own children about what they can and can’t read. Most importantly, they are free to raise children with the morality and values of their family, religion, and culture so that they are prepared to deal with difficult topics. Far better this, than to attempt to ensure that their children never encounter anything controversial.

I must now touch on current events. Nationally, censorship has been a hot button issue for the last three years. We have seen doctors and politicians censored on social media sites for questioning the narrative surrounding Covid-19. We have seen tech companies and college campuses censor people for “hate speech.” The popular app TikTok has banned videos critical of the Chinese government. Libraries across the country are facing coordinated censorship efforts targeting a wide variety of books. We have seen many classic books come under fire including, in March of 2021, six “racist” books by Dr. Seuss. I have consistently spoken out against these censorship efforts, and I will continue to do so, regardless of which side of the political aisle these attacks come from. I wholeheartedly endorse the American Library Association’s “Freedom to Read” statement, from which I will quote:

“Most attempts at suppression rest on a denial of the fundamental premise of democracy: that the ordinary individual, by exercising critical judgment, will select the good and reject the bad. We trust Americans to recognize propaganda and misinformation, and to make their own decisions about what they read and believe. We do not believe they are prepared to sacrifice their heritage of a free press in order to be ‘protected’ against what others think may be bad for them. We believe they still favor free enterprise in ideas and expression.”

I do very much empathize with concerned parents. I too am troubled by trends I see in today's culture and worried for young people. In fact, back in August, I was arguing with other librarians about some books that I felt should not be in libraries, or at least not in the teen section, because they were actually pornographic. Professionally, however, I need to stand against censorship in general, because it is a double-edged sword; censorship can be used by and against people on both sides of the political aisle.

So while we will not censor "Me, Earl, and the Dying Girl," what I can do is show you some of the many newer children's, tween, and teen books we own here at the Princeton Library that might better fit your family's values.

Tales of the Questor by R.H. Junior
Teen fiction graphic novel series
In this fantasy series with Christian and conservative messages, the adventures of a pint-sized raccoon-like creature lead him on a journey of courage, self-sacrifice, and discovery.

Based on the Gospel of Nicodemus, this book's spooky black, red, and white illustrations are designed to lure teens into reading. The story tells of the time between the crucifixion of Jesus and his resurrection, when Christ descended into Hell and brought salvation to the souls held captive there since the beginning of the world. It shows a humble, peaceful Christ ready to endure incredible suffering to save even the worst sinners- if they will let him.

"The Girl Who Owned a City"
Teen fiction graphic novel
Originally written in 1975, the book was re-made into a graphic novel for today's teens. In it, a pandemic has killed all of the adults in the world, and the surviving children are struggling. Lisa, a ten-year-old, is determined to rebuild a miniature American society and its values while avoiding the pitfalls of thuggery, socialism, and pacifism.

Graphic novels, Juvenile fiction
Each of the 14 stories takes an adult conservative nonfiction book and distills its concepts down to kid-friendly fun. Most of the books are related to economic principles. For example, "Food Truck Fiasco" deals with the problem of too much government regulation and teaches lessons from "Economics in One Lesson" by Henry Hazlitt. "The Search for Atlas" deals with entitlement, the "wage gap," and personal responsibility, borrowing from Ayn Rand's "Atlas Shrugged."

We have a monthly subscription to this series, and we currently have 18 books. Each story  showcases a different conservative American value and is co-produced with a conservative celebrity. For example, "Paws Off My Cannon" teaches children about the importance of 2nd Amendment rights, and was produced with Dana Loesch, who has worked for the NRA, Breitbart News, and TheBlaze TV. "Little Lives Matter" talks about the importance of motherhood, not taking the "easy way out," and the value of every child's life (even disabled children). "The Island of Free Ice Cream" describes the temptations and dangers of socialism. "Elephants Are Not Birds" is a response to children's books which promote transgenderism, and shows how an elephant does his best when he isn't pretending to be something he's not.

Johnny the Walrus by Matt Walsh, producer of the Daily Wire and the Ben Shapiro show

Toddler board book
This story is also a response to transgenderism. In the book, Johnny pretends to be various animals, and one day he really enjoys being a walrus. Johnny's mother decides to help him make this his new identity until she takes an unhappy Johnny to the zoo and is scolded by a zookeeper.

Hometown Hunters, Local Legends, and The Fishing Chronicles by Lane Walker
Juvenile fiction
Each series of 6 hunting books, 3 sports books, and 5 fishing books shows kids how to be good sports, loyal family members, faithful children of God, and responsible citizens. They have  mystery or thriller plots. They are often set in the Midwest.

If you're concerned about the content of books and movies your family is watching and reading, check out the following free resources:

Dove.org is a free website that offers "Faith and Family-Focused Reviews for Today’s Media."

VidAngel is a streaming service that allows you to watch movies or TV while skipping anything you don't like, including profanity, nudity, sexual situations, and graphic violence. The cost is $10 per month.